How to catch Islan Nettles Killer: 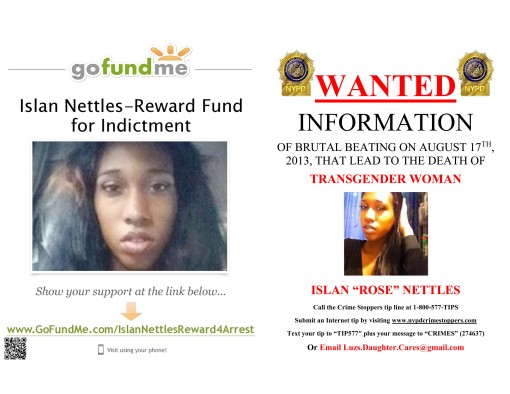 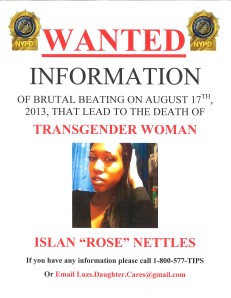 Several glaringly obvious breaches of procedure stand out about this case. At midnight, August 17, 2013, Paris Wilson, accompanied by friends, flirted with Islan Nettles in Harlem, directly across the street from Police Service Area 6 at 2770 Frederick Douglass Boulevard, between West 147th and West 148th Street.  (Public Service Area 6 covers the 24th, 26th, and 32nd Precincts.) Upon realizing Nettles was transgender, Wilson became enraged and began to harass Nettles and her transgender companions with transphobic slurs. Wilson began punching Nettles vigorously in the face until she fell to the pavement, slamming her head on concrete, according to the NYPD. Notified by one of Nettles’ friends, police officers arrived at the scene and pulled Wilson off of Nettles, according to DNAinfo.com. Nettles was then transported to Harlem Hospital and admitted with severe head trauma. Officers at Police Service Area 6 did not question Nettles’ companions thoroughly and never checked on Nettles’ condition after her admittance to Harlem Hospital, law enforcement sources have confirmed. Officers at the scene never obtained DNA evidence from Paris Wilson’s hands. Investigations were halted until August 23rd, when the D.A.’s office learned that Nettles was declared brain dead and removed from life support. When asked about crucial footage from the ten surveillance cameras located on the PSA 6 edifice and on surrounding structures, the D.A.’s office said all cameras were broken and no footage existed.

After the assault, Simone Wilson, mother of Paris Wilson, coerced an inebriated friend of her son to confess to the crime but he later denied the allegations, according to the NYPD. Shockingly, Simone Wilson was never held accountable for falsifying evidence or for hindering the investigation. Nettles’ friends and family also report that Simone Wilson aggressively photographed them at Harlem Hospital, as if threatening them if they filed charges. Following a misdemeanor charge of third degree assault, Paris Wilson was immediately released from jail on a mere $2,000 bail and on November 19th even that charge was dropped due to “lack of evidence.”  The D.A.’s office has since said it is “aggressively investigating the crime as a homicide,” but no suspect or statement on the progress of the investigation have been presented in the two months since the investigation began.

The Jan. 30 protest calls for the NYPD to explain its failure to immediately and adequately investigate the crime scene, question witnesses, retain DNA samples and surveillance footage, and check on Nettles’ condition, even if the crime was initially misperceived as merely an assault. We call for the NYPD to explain why Simone Wilson has never been charged with obstruction of justice. We demand that D.A. Vance provide a status report on the investigation. Finally, we call for the NYPD to audit the 24th, 26th, and 32nd Precincts and all city precincts for their capacity to conduct timely and unbiased investigations of this and all transphobic violent crimes.

“The transgender and cisgender communities together call on William Bratton and the NYPD to set an example with the Islan Nettles case by committing to seeing justice served, for Islan Nettles and all victims of transphobic violence in New York City,” said Brooke Cerda Guzman.

Take the 4,5,6, J, Z trains to Brooklyn Bridge/City Hall, walk on Chambers St. straight through the One Centre Street building, past the large red sculpture, to the front entrance of One Police Plaza.

Want to know what REALLY happened in the Islan Nettles case? Listen to this:

If Trans People decided to break-up with the LGB, this would be their theme song. If we are not going to push for FULL equality for Trans People – Give them their own voices, their own programs, jobs, sustainable life – DON’T KEEP THEIR FUNDING and give them their 40 acres and a mule!

Trans People, you have to call out the programs and people who speak of you but do not support you. You will not get equality by playing it safe. I know it may be hard to lose the little society gives you by speaking up but something has to give. Who are the leaders amongst you? Come forth…

I will not shut up or back off until someone picks up the torch and runs with it. I am Humanity 100% and I don’t see Humanity for Trans People.

LGBT Leaders fail to inquire why Simone Wilson (Mother of Paris Wilson, accused of beating Trans Woman Islan Nettles to death) who forced his friend to confess to the crime was NOT charged with a crime!

If Trans Lives Matter, when will our actions mirror those words? Luz’s Daughter Cares  is wondering why LGBT leaders and organizations are so quiet about  improper actions that took place during the investigation into the brutal murder of Trans woman Islan Nettles? Matter of fact, LGBT leadership have yet to “question” anything.

While updates from the DA’s office seem to suffice for others, I beg to differ.

In my opinion, it is no wonder the investigation was destined to fail, which it did, from the start.  The fact that once Islan  was rushed to Harlem Hospital, NYPD/DA did not follow up with Islan Nettles condition or contact her family until after she was pronounced dead, tells us the first 48 hours, the most important time frame of an investigation, was totally disregarded.  Another red flag is the “no camera footage” excuse the DA informed the public about. When the organizations were “updated” the DA couldn’t get a”visual” from the cameras on exactly who beat Islan to death, what was the response to that?

Oh yes, now I remember –  “Some of the cameras were not working”. Is that right? Directly on and across the street from a police station? Did you see that huge camera set up on the same street Miss Islan’s  head was fatally slammed on? Be advised, non-working cameras on a Harlem street directly across from a police precinct is an issue within itself and should have been addressed ASAP! It only took Luz’s Daughter Cares 2 willing bodies, an hour travel time, a $9 metrocard and a camera phone to note some VERY important information related to those cameras but no one was interested.

Lastly and just as negligent, community leaders failed to question why charges were not brought against the Wilson mother for tampering with the investigation. Maybe forcing a family friend to confess to a crime isn’t one. Yeah, right. What a fool believes…

For those unaware of what I am referring to, continue to read:

“Wilson’s mother has now been accused of taking one of his friends to a police precinct, where she made him confess to the crime and claim he was too drunk to remember anything about it”.

Luz’s Daughter Cares is praying those that can do something, will. Do refrain from repeating to the public yet another update from the DA’s office craftily put together by an intern. We don’t want to hear what THEY want us to know. We want to KNOW what THEY are NOT telling us. In other words, Luz’s Daughter Cares is saying, until the LGBT leaders are willing to “Get their hands dirty” and ask the “not so comfy” questions,we won’t get answers for the public. Even more importantly our Trans family deserves answers! Until you are ready to put your neck (or funding ) on the line  for true equality in everything for Trans people – stop waving the “Trans Lives Matter” banner.

The laziness all around has me yawning.

I know some of you are saying, “Who does this broad think she is? We have degrees, big titles, get political dinner invites and chat with the DA like buddies!”

Did Paris Wilson get away with murder? A Visual account of the Islan Nettles Court Hearings.

Did Paris Wilson get away with murder? A Visual account of the Islan Nettles Court Hearing on 11/19/13

Statement by the Manhattan District Attorney’s office at the trial of Paris Wilson, accused killer of Islan Nettles.
This was the complete statement read by the prosecutor in court Tuesday, 11/19/13:

“As the Court is aware, the defendant was originally arrested in this case on a charge of misdemeanor assault. Several days after the arrest, the victim died from her injuries. Since that time, we have been aggressively investigating the crime as a homicide.
For the reasons referenced in court on the prior two dates, however, the case has turned out to be a uniquely complex one, and we are not yet prepared to go to the grand jury. However we continue to actively investigate this case in the hopes of ultimately holding the person responsible for this crime accountable. Today, we concede that eh speedy trial time has run with only with regards to the misdemeanor with which the defendant is charged – and thus the case must be dismissed. It should be emphasized, however, that the crime we are investigating, homicide, has no statutory speedy-trial deadline. Therefore, should our ongoing investigation ultimately result in an indictment of Mr. Wilson for homicide, the case would be promptly restored to the calendar and would move forward, notwithstanding today’s dismissal of the misdemeanor charge.”

Islan Nettles’ Murder and the Shameful (Non-)Response of LGBs

So, you haven’t heard about this? Haven’t seen your lesbian, gay, and bi friends posting about it and changing their profile pictures to raise awareness about this injustice?

Maybe that’s because Islan was a Trans Woman of Color (TWOC)! 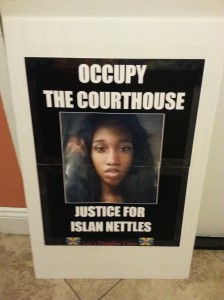